​​​​AR ~  A while back I saw a professional person that i like, and that I see occasionally.
While we we visited, I asked her (for the first time) about her husband. Her response shocked me... She said “He is very suicidal, and I am so worried about him. His adult daughter, by his first marriage, married a man from the Middle East, and had children, then moved there with him.
Her husband threw her off the roof of a tall building, and he was never tried for her murder. This man still has my husbands two grandsons and now, he has married another woman!   My poor husband cannot get this out of his mind and I never know if he will make it through another day!”
I asked her if I could pray for them, a “Special prayer” and she said. “Yes!”
(I would have done it anyway). Silently I put her husbands soul, and his first wife, his daughter and her husband, their sons, his present wife and all concerned or effected souls into a FCOA with full soul recognition and following the resolution of the FCOA, that his soul be purged with light for perfect soul growth.”
When I saw her two months later, I asked, “How is your husband?” She said, “Oh, he is so much better, thank you for asking... he is exercising every day now, and he has just started back to work.. He is amazingly better... but I feel like I need to say, “Thank You,to you... “
because I somehow feel this has something to do with you!”
[❤️] [🙏] [❤️] [🙏] [❤️] [🙏] [❤️] [🙏] [❤️] [🙏] [❤️] [🙏]

Jackie ~  I am an energy healer and quite often when I am working with a new modality, I will use my family as Guinee pigs to see if the process works.    Shortly after a doing a quick Court of Atonement for my daughter I received this text.

The Court of Atonement

Ken ~ “ My family was about as close as the guests on the Jerry Springer show, except it had gotten so bad, no one had spoken for almost 10 years.   Shortly after a Court of Atonement was called,  I received birthday wishes from each and every member of my family. Now, we are all talking again, and all of the disagreements of the past have disappeared and there is no mention of it. Amanda ~   “Years ago a friend and I had a falling out and we lost contact for over 3 years. I always thought it was such a shame to loose her friendship over what I believed was a small disagreement. I decided to put her soul and my soul into a Court of Atonement. I woke up the next morning to find she had sent me a friend request on Facebook!” Anonymous ~ “Your court of atonement is astounding! I put my father in a Court of Atonement with all of us kids regarding his alcoholism. He came to me a few days later and told me how a man had befriended him at a party and told him his life story. The man had been an alcoholic and spoke about how hard it was for his family. My father said, “ “This man was really an inspiration for me. I saw myself in his story and I am turning over a new leaf. I have to apologize to you kids. I had no idea how hard my drinking has been on you.”   ”Three years later he is still sober.”

Anonymous ~ I’ve been saying FCOA’s and placing myself and my ex husband in them for months now. He is $230,000 dollars behind in child support. Nope....that’s not a typo. 😳😳. He’s been in hiding for quite some time now. He called me about a month or so ago and wanted to get things worked out with child support! I have been working with him and so far it’s been going so well I’ve been astounded. We’ve talked and agreed on most of the same things. I’m so grateful for Amy Jo Ellis and all that she has taught us.

The Court of Atonement 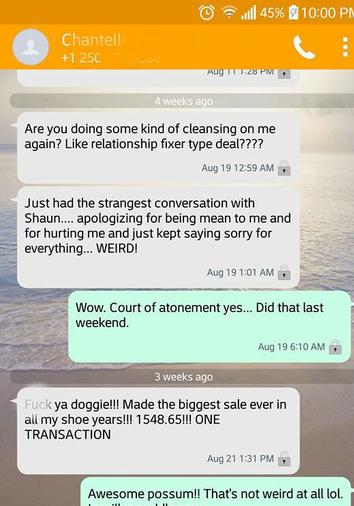 What her Students Have To Say.

​AR ~  I am Amy Jo’s Mom, and I used the FCOA, for two young sister cattle dogs... One was very alpha and one very submissive. They could not eat, sleep or play together without pain and fighting and I feared having to place one with someone else... but my whole purpose in buying sisters was to bring joy to them and to us. Then I thought of using the FCOA. I did a very simple FCOA, I placed myself in a FCOA and the souls of Bluey Richards and Biscuit Richards in a FCOA for the purpose of peace and harmony between all, and for sisterly love and affection and joy for all... I was stunned as immediately they accepted each other. They eat together with zero problems, side by side... they chase balls together, and they play fight, but they are both loving it. Very happy young girls.
Keep it positive and don’t mention any negative behavior. Have fun! [🙏] [❤️] [🙏]

Hannah ~  "I've been doing this by myself for a month or two with amazingly profound results. It has helped me to let go of stuck feelings and emotions, interpersonal and family conflicts, and energetic ties to various situations, among other things.

Her 22 page booklet which costs $5, is worth (way more than) its weight in gold! It will teach you how to do the process (quite simple) for yourself and anyone/ anything else you feel inspired to help! There is also a Court of Atonement facebook group where people are sharing their own experiences, questions, and helping each other for anyone that wants to join!

I honestly believe this is the most useful and transformative $5 I have ever spent in my life. I couldn't recommend her more highly! Thank you again Amy Jo for all of your help, and for offering these gifts so freely and selflessly! [❤️] [❤️] [❤️]

"After having positive results using this simple technique, I contacted Amy Jo  and was impressed with her down-to-earth manner. "  ~  Raymon Grace

If you feel moved to assist her in her mission to heal the spirit of mankind.  You can make donations to www.paypal.me/amyjoellis.

With the use of the Court of Atonement process.

*   Conflicts dissolve  *  People from the past call to  say hello  *  Trips to the Doctor and even the DMV go smoother!

Miracles like these are happening every day with people who are using the Court of Atonement.

This tiny downloadable booklet is improving peoples lives!  It takes only about 20 minutes to read and even less time to apply and yet the results of the Court of Atonement has gained it the respect of healers and spiritual leaders around the globe.      It is currently being translated into 7 languages and being used in over 100 countries!